I tried to hold off on posting this review until I got my camera back, but when I finally did, I found my can of tea had magically emptied... Here's a picture of an orange sunset, instead, that reminds me of these mellow teas. 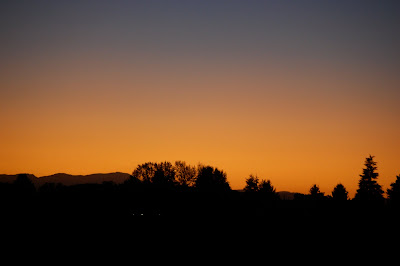 I have reviewed Mellow Monk teas in the past and haven't been disappointed. Even the less expensive and lower quality offerings produce enjoyable cups. On the table now is his Shaded Leaf green tea.

Shaded leaf is a Japanese green tea of a style known as kabusecha. Kabusecha is similar to gyokuro in that in its final stage of growth, it is covered with a woven cloth that diminishes the amount of sunlight that reaches the leaves. This encourages the leaves to produce more catechins and chlorophyll, and less tannins, developing what many consider to be a sweeter flavor. Kabusecha is not grown from gyokuro strains (yabukita), nor is it aged, so it's closer to sencha than gyokuro, and can be prepared likewise.

The dry leaf smells sweet, reminiscent of gyokuro. The leaves are curled like Mellow Monk's other tamaryokucha teas. As per the usual sencha methods, 2 tsp of leaf are steeped in 180ml of 176° water for 1.5 min. The liquor is a light yellow-green with a muted, yet sweet and lightly earthy mellow aroma.

The tea has a silky body with a mineral profile and grassy/marine taste. Overall it is sweeter than the usual sencha and has less of the grassy taste. Surprisingly, it has a long lasting huigan(returning sweetness/aftertaste) that runs into the second steep of the tea. The second steep is made with the same parameters, but for the exception of a ~5 second steep time, and mild splashing to prevent the "stewing" of the tea (During later steeps, sencha-type teas can give a stewed flavor which is hard to determine the cause of, but too much and too little splashing have been put to blame). The second steep is not too different except for the more muted aroma and sweeter, gyokuro-like flavor lacking the mineral profile of the first.

In summary, Shaded Leaf is another mellow (surprise?) green tea offered by Mellow Monk. It's great for relaxing, and is easily enjoyable. Unfortunately, it doesn't have the complexities that I yearn for. It has, instead, an enjoyably sweet flavor, a dominant mineral profile, and an unusually long, sweet aftertaste. The aftertaste brings Shaded Leaf up to my level of teas, and the mineral profile gives a hint of what growing in volcanic soil will do to the flavor of a tea.
Posted by Wes Crosswhite at 2:18 PM 3 comments:

Why Better Teas Have Less Flavor 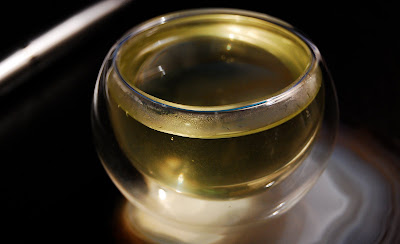 If you haven't yet learned this base fact about tea, then now is the time. You may have found yourself quite pleased by the emboldened flavors of cheaper, less quality teas, only to be disappointed when you took a leap to the next tier (probably in price), by a definite lack of flavor-bursting pleasure. This is no surprise to the experienced drinker who understands that better teas have less flavor.

While a bold statement, it holds 100% true, if we are to define the level of flavor by the profoundness upon which the main flavor greets us. However, to shift this definition to the allowance of a complex, post-introduction, intellectual investigation into the flavor profile of a tea will move us into the realm of connoisseur. What is meant by this long-winded definition is that a truly flavorful tea, in the connoisseur's eyes, will have it's live, main flavor, followed by complexities such as other milder flavors, mouthfeel, and even chaqi, which give the tea a wealth of character and an engaging profile.

The goal of every tea-loving person should be to try to find these complexities and understand in their own way what these flavors and feelings impart onto a teas true character. Is it their terroir, or something more distinct? The most difficult part of becoming a knowledgeable tea taster is to get a foothold on these things. Terroir, mouthfeel, and chaqi are very interesting aspects of drinks that will slip right by you unless you take the time to find out what they are. But once able to identify them, you'll enjoy tea on a whole new level, and understand why better teas actually have more flavor.
Posted by Wes Crosswhite at 12:45 PM 7 comments:

A long hiatus, drawn to a close as the cool, crisp air of winter envelops the small town of Eugene, Oregon.