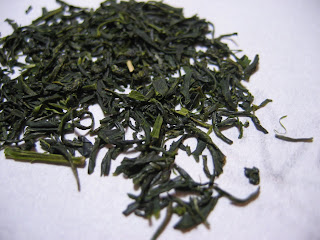 Looks like I get to satisfy the curiosity of sencha drinkers everywhere with this review. More Guricha! Mellow Monk's Top Leaf tamaryokucha is what's in the pot today. Here is the description from the Monk's website:

This is our top-of-the-line honcha, or traditional green tea. Top Leaf tea is specially pampered in its own separate corner of the tea orchard. Not only does this tea receive extra fertilizer (organic, of course) during the growing season, but at harvest time, the growers pick only the top layer of young tea leaves. The result is a distinctive, more subtle, gentler flavor. This tea is always first flush.

Top Leaf comes from the Aso region of the Japanese island of Kyushu. All of Mellow Monk's tea comes direct from small family-farms that have been certified ecologically friendly by Japan's Eco Farmer program. 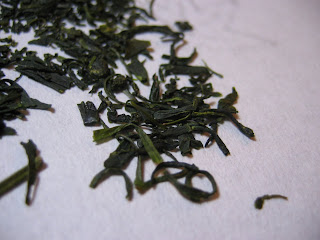 The aroma of the dry leaf is mild and mellow, but carries with it the tantalizing tang noted in the previous post. This tang smell is exclusive to the leaf of guricha. The leaf is in amazing shape compared to the usual broken up sencha leaf. This shows that care really did go into the processing of this tea.

For this first steep, I used 1.5 teaspoons leaf in 180mL of 176°f water for 1 minute. The Mellow Monk advises simple brewing, paying no mind to thermometers, timers and the like. I decided to go my usual route, as appealing as simple brewing sounds. I do wonder whether there might have been a tea-scientist of days past, putting sand grains in a glass vial for exact brewing. :) 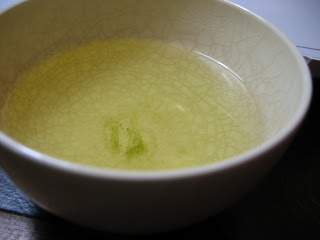 The scent from the brew is mellow and slightly earthy. Upon tasting, the slight tang presents itself to the palate. The tea at first tastes very clean and mellow with some earthiness, and is followed by a soft bite of tang characteristic of guricha. The tang is predominantly present in the aftertaste. The gist of this first steep is that the tea has a very clean taste. Den's guricha had a much stronger bite of tang, which was a kick to the tastebuds. This tea is different in that it brings into the picture a slight earthy taste, but is still characterized by the guricha tangy aftertaste. I feel that I can taste the more organic methods used in growing the plants, and perhaps even the volcanic soil of the Aso volcano. 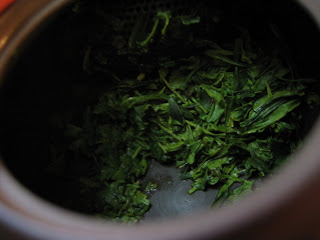 For the second steep I decided to go with 180° water to see if I could bring out any hiding tastes. The result has an aroma similar to that of most sencha second steeps. It has a deep vegetal-sweet aroma as well as a ghost of something that smells almost citrus. The taste has smoothed into a deep vegetal-sweetness that reminds me of second steep fukamushicha. The characteristic guricha taste is still present, but has gone down to a much deeper flavor, and can no longer be seen as a "bite." This second steep is thick, and just as flavorful or moreso than our famed fukamushi, but the taste resides in mellow vegetal-sweetness with no burst of flavor. 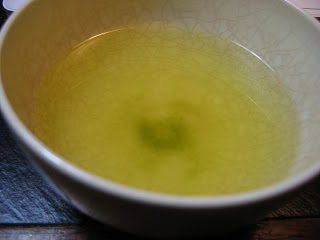 In comparison, Den's guricha packed a punch of flavor that made me believe could only be done with heavy chemical fertilizing. Mellow Monk's Top Leaf, whether fully organic or not, brings a much cleaner and mellow flavor profile to the palate, while balancing in an earthy undertone to a sweetly green tea. What I realize now is that the mellow flavor profile is brought about by the use of the uppermost tea leaves put into this tea. Tea buds and younger leaves always bring about a more mellow tea. The Top leaf is very interesting. Next session will see more leaf go into the brew. Right now, I'm thinking 2.2 teaspoons would bring about something different. If this additional leaf adds a new dimension, I'll throw up a post. I also have some the Monk's Choice to review on another day.

Posted by Wes Crosswhite at 2:22 PM

Isn't Monk's suggesting harvest techniques that are unusual for Japan? I thought virtually all the Japanese teas were harvested by those big bush-mowing machines. The quotation seems to be suggesting something closer to the "two leaves and a bud" hand plucking done in other parts of the world.

I find it interesting that this tea exhibits terroir as the best wines supposedly do. I would be interested in hearing your further thoughts and judgements as you become more intimate with this Tamaryokucha. I feel swamped in magnificent Japanese greens now, but this sounds quite out of the ordinary and could tempt me.

Has anyone finally figured out an exact definition for Guricha yet?

Both Tamaryokucha and Guricha translate to "Curly Green Tea." "Guri" is actually the name of a curly design pattern seen it traditional Japanese art (check the monk blog).

one note of suggestion- i think you're burning your precious green tea leaves friend. with the delicate senchas and gyokuros, I've found that they don't tolerate temps higher than 169f- & 159 at 30s for first and 163f at 25s for second steeps illuminates the perfection of the leaf without a hint of bitterness, which despite what most would say, should not be a characteristic of tea. also - my husband found that 179f draws the brilliance from top shelf oolong such as li shan and lu gu.
much happiness to you in your future journeys into tea.

Actually, many more factors come into play than just temperature. Specifically, hardness of water, and disturbance of leaf. Here we have extremely soft water, and I take care to disturb the leaves very little. These factors, and definitely more, let me get perfect cups of sencha, even with 176°f+ water.

Dark oolongs do like hotter water, and I use near-boiling water for all of them.

Much happiness to you, as well, Candice. :)

Wow, Candice...179F for Taiwanese wulongs? It always amazes me the way people brew their teas and at what temps. Of course tea is a very personal thing and if your brewing method and temperature give you great cups and you are happy, who can argue with that? It is, after all, YOUR tea! My mother drinks various Japanese Senchas every day that I prepare for her. Some are very high grade and some in the middle, depending on what I have at the moment. But I always infuse them at temps right around 175-180F. Very rarely would I go less than 170F for a Sencha. They taste great to me and my mother loves them. I drink a lot of Taiwanese wulong, high grade Dong Dings, Alishans, Jinxuans and others. Most of the time I brew them at 195-200F, sometimes 205F tops. Greener wulongs just don't need boiling water like darker teas do. But yet I have seen many Chinese commonly use boiling/near boiling water on green tea! Makes me cringe! LOL... I know a Taiwanese who advises to use the hottest water with all wulongs and she's very familiar with them, and she uses near boiling water with green teas. I tried some temps in the 180F's with my Taiwan wulongs and I thought they tasted bad. So 179F just amazes me. But who's to say what temperature is the ideal? Just experiment and let your own taste be the guide. Well enough, time for a hot pot.....